In the upper right hand of this picture is Babaloo International Café & Bar. Hubby happened to find a Groupon so we decided to try this Spanish tapas restaurant out. I wasn’t sure what to expect on a Saturday night. They offer live music Friday and Saturday’s which starts at 9:30pm. We didn’t get to see it because we where there from 7:30-8:30pm. The place is a good layout and a little on the dark side. 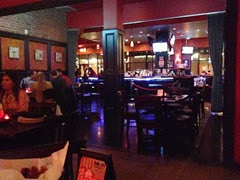 We started off with drinks, D ordered a Mango Mojito $8 and I had their house made Sangria $5. As most reviews online said the mojito lacks the alcohol in the drink, you mainly tasted the mango and mint. Mine on the other hand was really good, my only complaint is that it could be in a larger glass. 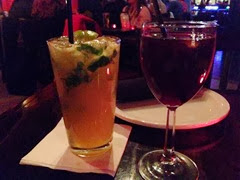 We rattled off a list of tapas from the menu and got to tasting. We started with the Sautéed Calamari $8.50 (Sautéed calamari marinated with a coat of paprika seasoning, sautéed with extra virgin olive oil, fresh garlic and a good squeeze of lemon). Ok first off the calamari was overcooked and chewy. Second the sauce was the best part and there’s no mention of that in the description. You need the squeeze of lemon on there for sure for that touch of acid, because I’m 99.9% sure they didn’t squeeze any lemon on there. I probably wouldn’t recommend this dish. 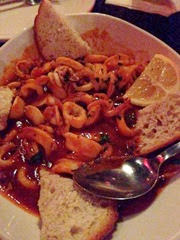 Next up the Cuban Crab Cakes $8.50 (Cuban crab cakes wrapped in plantains, fried & topped with an avocado aioli). I happened to like this dish except for the fact it was not hot it was less then room temperature. D didn’t care for it as much. I’m not sure what made the crab cake Cuban, because it tasted like a normal crab cake to me. I would get this one again. 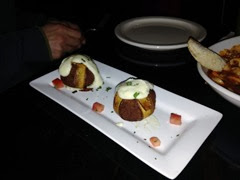 Next the Mini Beef Wellington $10.95 (Tender pieces of choice beef tenderloin sautéed with herbs and sprinkled with dry sherry, placed in a flaky puff pastry with mushroom Duxelle). Um I don’t know how to put this nicely, but I’m starting to feel like we are being served frozen appetizers from Sam’s Club! Another dish not hot and the puff pastry was soggy. Not to mention it’s totally not worth the $10.95 for 4 bites of meat which didn’t taste like choice pieces rather the ones that have that super meaty flavor that needs to be marinated out of it. 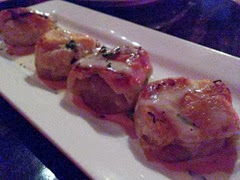 Moving on to the Fried Green Beans $5. You really can’t go wrong with these and they where served with a flavorful dipping sauce. 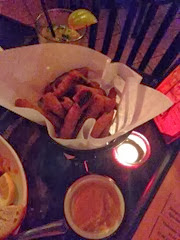 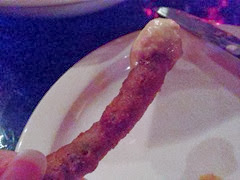 Last up was the Bacon Wrapped Scallops $9.95 (Scallops dusted with seasoned bread crumbs, wrapped in smoked bacon tossed with homemade bbq sauce). OMG come on!!!! Now I know I’m having Sam’s Club frozen appetizers and the sauce has to be KC Masterpiece! The scallops where just warm enough to eat. Horrible!!!! 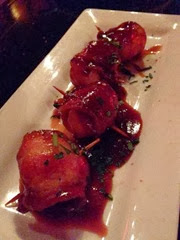 For our last round of cocktails D ordered a Jack Daniels Fresca $10 (Jack Daniels Whiskey, Fresh Lemons, Elderflower Syrup, Muddled Mint Leaves, Sweet & Sour and a Splash of Sprite) I thought it was a really good drink that I would sit by the pool and drink. D didn’t care for it as much and said it had too much Sprite. I wanted their Holiday Martini they had advertised on the table, but was informed they where out of the main vodka used to make the drink so I settled on a Little Ricky Sampler $13 which was a choice of 3 mini martinis. The Tootsie Roll had rave reviews online so I chose that one, a Sour Apple Martini and a Lemon Drop. By far the best one was the Lemon Drop. I’m very picky when it comes to a lemon drop, but this one had a nice balance of sugar rim with just a pinch of salt in it and they make their own lemonchello which made the drink. I praised the bartender on that being one of the best I’ve had in a long time and he said it’s because of the lemonchello which he gave me a shot of. 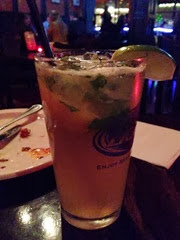 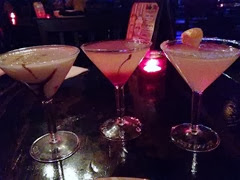 Honestly I will not be going back to this place, even if you offered to pay. This is not the flash back to our magical trip to Spain I was thinking it would be. The only good thing was the lemon drop martini and fried green beans. Will see how long they stay in business I guess the hope to stay afloat by counting on people to drink and not realize the food is awful. 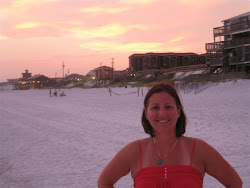 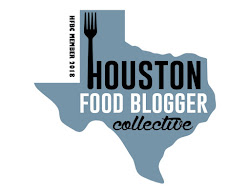